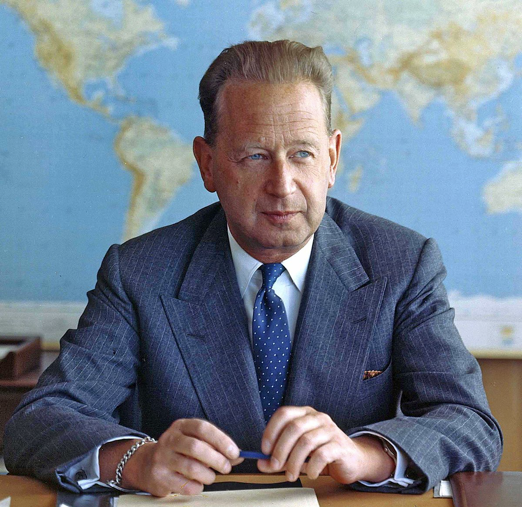 World Premiere:
The Night of the Secretary General

As the Secretary-General of the United Nations from 1953-61, Dag Hammarskjöld used his post and its “bully pulpit” to strive for world peace during the Cold War. Among the highlights of his tenure at the United Nations were his negotiation of the release of eleven US pilots captured during the Korean War; the establishment in 1956 of the UN Emergency Force; and his intervention, also in 1956, to help resolve the Suez Crisis.

After his death, Hammarskjöld’s book, Vägmärken (Markings), was discovered in his home, along with a letter giving permission for its publication. This deeply personal book revealed him to be a man of unshakeable integrity. Paul H. Kirby, composer, and William G. Marx, librettist, have teamed up to create a music drama centering on Hammarskjöld’s thoughts and ideals, as expressed in his own words, as translated by Leif Sjöberg and W. H. Auden.

Composer/conductor Paul H. Kirby has served as music director and conductor of the Central Iowa Symphony, Iowa State University Symphony, Houston Youth Symphony and Ballet, and several other musical organizations. He holds degrees in music from the City University of New York (Doctor of Musical Arts), the University of Michigan, Michigan State University and Rice University, with additional study at the Mozarteum in Salzburg. He has been the recipient of a wide range of commissions including ballet, choral, organ, musical theatre, sonatas, and symphony. His musical arrangements, compositions, discography and resume are listed at library.newmusicusa.org/PaulHKirby. He is also keenly interested in supporting his fellow composers. In addition to sharing his financial expertise with the Musicians Club of New York as its Treasurer for more than a decade, he also served as the first Chairman of the Musicians Club's re-instituted Member/Composers Committee, and has become a regularly featured composer and performer at its annual concert. In addition to his bio and available sheet music, videos of his performances are at:

Librettist William G. Marx completed his A.B. and A.M. degrees at the University of Michigan (UM) and his Ph.D. in English language and literature at Michigan State University (MSU). Dr. Marx’s academic interests lie in the study of early English literature, especially that of medieval English drama, the plays of William Shakespeare, and the life and work of Thomas More. His doctoral dissertation applied selected techniques of Constantin Stanislavski to the interpretation and staging of medieval religious drama. While serving in the U.S. Army in Germany, Dr. Marx directed a production of Samuel Beckett’s Waiting for Godot, which toured half a dozen bases in the greater Nürnberg area. At MSU, he directed and acted in seven productions of medieval English drama that comprised some fifteen plays. For over 25 years, Dr. Marx worked as an assistant to the director of the Center for Integrative Studies in MSU’s College of Social Science. He retired from MSU in 2007 and now enjoys the honorable station of Senior Specialist Emeritus. Dr. Marx is co-author of the recently published Staging Salvation: Six Medieval Plays in Modern English (Tempe, Arizona: Arizona Center for Medieval and Renaissance Studies, 2014). He has also published chapters on the character of “Mrs. Noah” in English medieval drama (in From Page to Performance, ed. John A. Alford, 1995) and on the life and works of Thomas More (in Icons of the Middle Ages, ed. Lister M. Matheson, 2012).

Baritone James Parks, a native of Frederick, Maryland, was most recently seen in Southern Florida at Stage Door Theater in The Last Romance and in Macomb Michigan, premiering Spaghetti in a Hot Dog Bun. In New York City, James is sought after for collaborating on new musicals and demo recordings. Recent new works include Bradley Cole, Dick Whittington: an Xmas Panto, and Tombstone the Musical. James was part of a national tour of Pinkalicious. Mr. Parks holds a bachelors of music from Peabody Institute of Johns Hopkins and a masters of music from NYU Steinhardt.

About Musicians Club of New York’s Commitment to this Project

To open its 2017-18 concert season, MCNY is proud to present its long-serving Member-Board of Directors-Treasurer-Composers Committee Chairman Paul H. Kirby’s opera, “The Night of the Secretary General”. Although we have a 116-year history in which many compositions have been championed, this is the Club’s first full opera – and its first special project in decades. With two performances, a nine-piece orchestra, singer and stage director, it is also a very expensive endeavor. The actual cost of the two-day event is over $8,000, but we have been fortunate to receive several generous donations specifically for this project that covers a good portion. While Paul is planning to cover any shortfall, it would be meet and just if his enormous creative achievement was all he was required to contribute. Please consider joining this effort and your name will be listed in a separate section in every MCNY program this year. Check the separate column on the Membership Drive envelope, go to the Join or Donate section of www.musiciansclubofny.org or talk to Paul, Brian or your favorite Board Member.

MAKE A SPECIAL DONATION TO THIS PROJECT:

With a nine-piece orchestra, the budget for this world premiere of Paul H. Kirby’s music drama, “The Night of the Secretary General," is over $8,000, but between the Musicians Club and Paul’s own supporters, over $6,000 has already been donated to this project. While Paul is ready to make up any shortfall, wouldn’t it be great if the composer didn’t have to do that? Anyone who donates to this project will no doubt find a warm spot in Paul's heart and in the Musicians Club's whatever a club has. You will at least be listed separately in all MCNY programs of the 2017-18 season. If you'd like to make a donation to this special project, you can click on the following link: